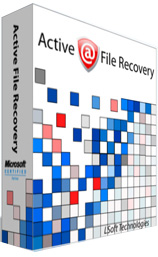 [email protected] File Recovery for Windows provides the ability to effectively detect and recover files and disks lost due to accidental deletion, disk formatting, virus and other reasons.

The Ultimate edition extends the Professional package with [email protected] Boot Disk Lite: an ISO image that you can use to create a bootable CD/DVD or USB with a lightweight version of Windows 7(WinPE 3.1) or Linux (openSUSE 13) running in RAM. It is the only way to recover your data when your system is not bootable and you cannot attach the corrupted Hard Disk Drive to another machine. Supplied Linux LiveCD boots the latest UEFI secure boot systems & regular BIOS.

Recovers extra-large, compressed, encrypted and fragmented files on NTFS, just deleted files can be recovered based on NTFS Journal ($LogFile)

Efficient & easy to use recovery utility for deleted, damaged or lost files, even if your PC doesn’t boot

Support for disks created by VMWare & VirtualPC: open and work with virtual disks as if they are regular HDDs

Support for multi-tasking: user can QuickScan found volumes and recover data while SuperScan is in progress

SuperScan progress: displays a map of scanned sectors and found meta-data while scanning

Configuration parameters stored locally and re-loaded upon next use

Increased speed & performance of recognizing files by their signatures

Added option to skip next sectors while disk scanning, in case if bad sectors detected

Photos recovery, pictures recovery if they were deleted from flash media, or lost due to formatting a memory card

Recovery for all Windows versions supported

File recovery for files and documents that have been lost by disk formatting, damaged by virus attack, or a power failure

The software is not strictly limited to finding these specific file types. Custom file signatures can be defined using simple scripting language. When the logical structure of a hard drive is heavily corrupted, this signature scan will use a special algorithm to seek out such files. Under typical file deletion or formatting of a hard drive, a regular scan is sufficient to reveal files of ANY type.